Home > About Us > West Coast Turf in the News 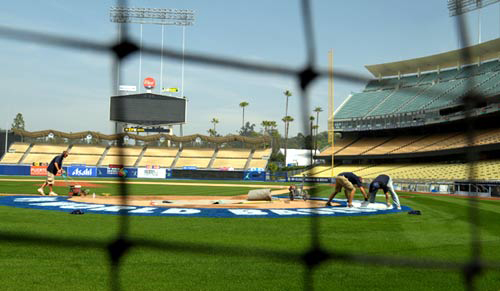 Dodger Stadium is in the finishing stages of a grassy makeover. It's a process
undertaken every four or five years, with lush results. (Jamie Rector / For The Times)

Dodger Stadium's lush greenscape is groundskeeper Eric Hansen's turf. Every few years, he rips it up and lays down a new field of dreams.

I'll never forget the February day, just two months ago, when I took a peek at what I expected to be the vivid greenscape of Dodger Stadium and discovered instead a giant sandbox, 330 feet down the lines, 400 feet to center.

It was like catching Grandma in the arms of the postman, wrong on levels you didn't even know existed. Major league fields are supposed to be the sort of lush summer glens that inspire men to craft weepy movies about their fathers. The Dodgers in particular have always had perhaps the finest field of dreams in all baseball. In a Sports Illustrated survey, players named it their favorite playing surface.

Walt Whitman once dubbed grass "the handkerchief of the Lord," and you could almost imagine the great American poet roaming center field here, glove at his hip. I suspect he would have vacuumed up everything hit his way in Dodger Stadium. As with Mays and Mantle, no fly ball would have ever bruised the earth.

But on this perfect February morning -- a day that cried out for picnics and marriage proposals -- Dodger Stadium was a lunar landscape, not a single blade of grass in sight. You call this a ball yard?

Eric Hansen is the head groundskeeper, a former Air Force man from Texas who will discuss almost anything you want, one of the calmest people in the Dodgers' organization.

Turns out Hansen is the one who's painted over the Picasso. Under his guidance, crews have peeled up all that beautiful turf. It looks to be the sort of thing you'd do in revenge, out of spite and anger.

But it's something the Dodgers do routinely every four or five years, beginning with a two-week makeover in late January, followed by careful nurturing over the next two months, just before fans show up for the April opener. They pull up the old carpet and put in the new. Fans never witness the upheaval; we just swoon over the finished product.

As with all big spring yard projects, there are a hundred issues for Hansen, not the least of which is the unpredictable weather and inopportune rains.

"I don't get too worried," says Hansen, who has been with the Dodgers for 10 years and worked at the Toronto Blue Jays' spring training complex before that. "I've done it so many times."

As with any major yard project, it takes different skill sets, big crews and lots of heavy lifting. A lot of the real work goes on beneath the surface.

Step 1: The old grass comes out, along with about 2 inches of roots, seed and soil (dirt infield areas are left intact).

Step 2: New sand is brought in, about 400 tons, to replace most of the discarded stuff.

Step 3: Gypsum, the double-malt scotch of Southland lawns, is added to loosen the soil and keep it from compacting.

Step 4: The new and existing material are blended together to a depth of 6 or so inches, but not deep enough to disturb the Byzantine system of pipes, pumps and other irrigation devices beneath the field.

Step 6: A 12-man crew from West Coast Turf brings in 100,000 square feet of sod, in 42-inch widths nearly three times as wide as the turf you get at the corner nursery. Over a two-day period, they press and caress this new field into place, as if smoothing on a Band-Aid.

This is where the remake gets interesting.

Think of the Dodger Stadium turf as two crops, spring and summer. The original grass, a Bermuda hybrid, is grown in Palm Desert, where the root systems are nurtured in sandy soil similar to that of the stadium in Chavez Ravine.

The growers then overseed the Bermuda with rye, the leafy, wide-bladed cool-weather grass common in northern climes. This rich, deep-green grass does better in the early months of the baseball season, taking dominance as the Bermuda lies low. By June and July, the rye begins to give way to the Bermuda grass, which better tolerates crushing heat.

The makeover that Hansen and his crew undertook this spring is necessary when, after several years, the rye adapts and refuses to go dormant during the summer, giving the field a scruffy appearance.

The laying of the sod takes 16 hours, demanding specialized equipment and, ultimately, the human touch. Behind the outfield, a forklift operator unloads big spools of the turf from flatbed trucks. The spools are then hooked to the nose of what looks like a big, ornery lawn mower, which unwinds the grass the way you would a roll of carpet. Tom Stafford of West Coast Turf says the company, which also provides the turf for the Angels, Padres and A's and at the Rose Bowl and Coliseum, created the machines by converting old mowers.

The re-sodding, about $100,000 per ballpark, goes quickly, with several members of the crew following behind to press the seams tight with rakes and heavy garden forks. Back and forth the crews work as a unit, first blanketing the infield, which must be pool-table-smooth, then moving to the outfield, making passes as if mowing. They save the simplest areas for last: the bullpens, which are about the size of a typical Burbank backyard.

After letting the sod root for a couple of weeks, Hansen follows with what he calls "coring," essentially poking holes in the grass to release carbon dioxide and allow oxygen to the roots. His crew of three full-timers runs the coring machine over the field. Chunks of sod and dirt spring to the surface like skinny cigar stubs. When the coring is finished, the crew clears the stubs with hand rakes.

Once the field breathes for a day, the crew spreads sand over the sod to fill the puncture wounds left by the coring and also to even out low spots.

To a major league ballpark, sand -- not soil -- is the magic carpet on which everything rides. Screened so that the grains are a variety of sizes, good sand drains easily, doesn't clump up and is one of the reasons modern playing fields don't have the old-fashioned crowns that ball fields once had to shed rain.

Today's stadiums -- Wrigley Field was the last holdout -- are virtually level, laser-graded to a perfect flatness.

Hansen, a former high school baseball coach who went on to earn an agronomy degree from Texas A&M, walks the field during the coring process, twisting a shoe just slightly to feel for flaws and moisture. After decades in the business, he can read a field like Braille.

Though Hansen's deep-green outfields draw the eye, it is the dirt infield that requires most of the crew's work (seven additional workers are brought in for game-day prep).

The Dodgers are fortunate to be able to get high-quality infield dirt locally, while other clubs are forced to bring in material from elsewhere. Larry DiVito, groundskeeper for the Minnesota Twins' new park, opening next year, is checking out dirt samples from as far away as Pennsylvania and California.

As with the sand, the Dodgers' infield dirt is dug from Southern California hillsides and then screened to 2 millimeters, which filters out stones and bigger particles. Hansen will bring in 12 cubic yards of the dirt this spring, then amend it with calcined clay, a top dressing that's been baked at very high temperatures.

"It provides a nice texture for the infield skin," Hansen says of the clay. "We also use it as a drying agent. It's like kitty litter."

Moisture management is vital to a ballpark and its dirt infield. Hansen doesn't keep his sprinklers on a clock, for instance, preferring to determine on his own when to activate the 10 zones. Concerns over cost and conservation, and the optimal condition of the field itself, prompt him to put as much distance between sprinkler sessions as possible.

"You need to learn to read your turf and push that interval between waterings," he says, advocating the same moderation for homeowners.

In addition to surface sprinklers, Hansen has a computerized underground watering system at his fingertips, installed 13 years ago to allow him to water the grass from below during dry periods. The grass is kept at nine-sixteenths to three-quarters of an inch in height and mowed every game day.

For groundskeepers, innovations in equipment change the business on an almost annual basis. In Minnesota, DiVito will have a subsurface heating system loaded with glycol (the stuff that keeps your radiator from freezing) to remove the cold winter chill that lingers well into April in the upper Midwest.

Yet Hansen insists that instincts and experience are as important as the latest technical upgrades or underground magic.